Timbuktu Was Once Africa's City Of Gold

Timbuktu was once Africa's city of gold. Ironically, the legendary city of Timbuktu was rich with, not only the element of gold, but it was also rich with learning institutions as people from all over the world would travel to Timbuktu to learn and enjoy the vast educational resource

Timbuktu was once Africa's city of gold. Ironically, the legendary city of Timbuktu was rich with, not only the element of gold, but it was also rich with learning institutions as people from all over the world would travel to Timbuktu to learn and enjoy the vast educational resources and scholars. It's because of legendary emperor, Mansa Kankou Musa, who ruled from 1312 to 1337. That is when the Mali empire reached its peak. Mansa Musa was the great-nephew of Sundiata Keita, who was the empire's founder. Mansa Musa went on a great pilgrimage to Meca in 1324. He bought with him a train of camels weighed down with tons of gold and an entourage of thousands of followers. When he visited Arab, he made a very lasting impression on the Arab world.

Arab bought something to the table that Mansa Musa and his people valued greatly, wisdom. His pilgrimage there would change everything about the great city of Mali, including the way the real estate was built, architecture, style, and foremost, the great city of Mali would become a vast institution of learning with over 150 different learning institutions that would attract scholars from all over the world. It's one of the greatest stories that was never told, the story of Mansa Musa and the tales of the great wealth - kids playing jumping jacks with diamonds and rubies. Egyptians had no idea that an empire of such vast wealth and splendor existed beyond the desert. Cairo was one of the richest cities in the world, yet even the Cairenes were amazed by the tons of gold the emperor bought with him on his extravagant voyage to their land. During his voyage, Mansa Musa did his country a great disservice. Many Malians believe that on his luxurious and fascinating pilgrimage to Mecca, he had done Mali permanent damage by squandering the countries wealth. You see, his voyage came at a great price. Mali almost went bankrupt.

Kankou Musa owed his wealth to the Mali Empire's flourish economic life during that period. He taxed all trade and demanded tribute from subsidairy rulers and cities to acknowledge his authority. This authority gave him rights to any nugget of gold that was found within his empire. He used the income to pay for horsemen whom were armed with swords and lances as well as infantry who fought with bows, spears and arrows. Kankou Musa was not an absolute ruler. The territories preserved a large degree of self-government. Kankou Musa was their overlord.

In 1352, a Moroccan traveler by the name of Ibn Battuta decided to cross the Saharan desert to make his way to Timbuktu. He was very impressed by the order that prevailed within the domains of the Mali empire. He was also fascinated with the architecture of the buildings, which now had Arab influence. He was not impressed with the women. He found their behavior scandalous as they wore, in his opinion, revealing clothes and also walked freely in the streets, which was intolerable.

Salt was just as valuable as gold in Timbuktu. They traded gold for the beds of salt. Caravans traveled to Timbuktu, which is 400 miles to the north. An ancient lake bed contains 7 million tons of salt which are hacked right out of the earth. Salt beds are loaded on camels for export. Salt was called white gold because it is essential to the human diet. Salt was even used as money when cut into standardized pieces.

By A.D. 1000, the use of gold coins had died out in Europe, because they didn't have any gold. However, the Malian gold, filtering through the Muslim world, allowed European states to resume the minting of gold currency, such as the Venetian ducat they had begun trading in 1284. 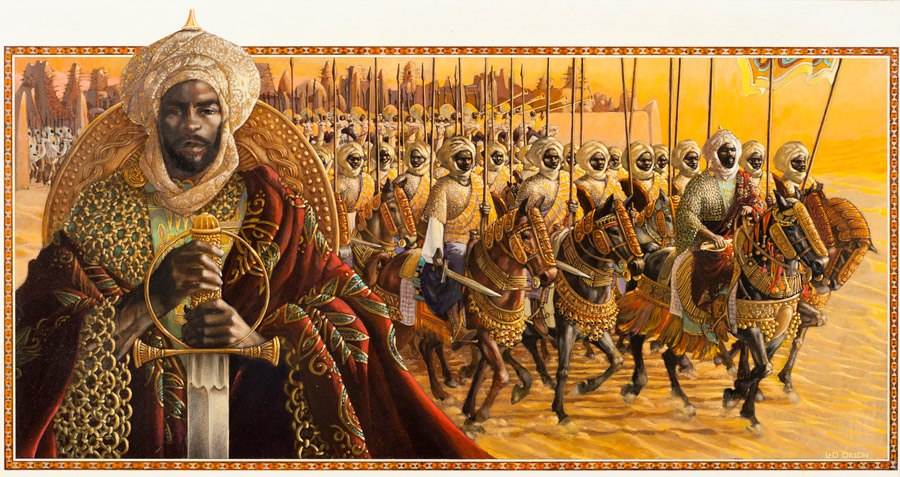 The Mali Empire drew its wealth from control of the trade of gold and salt. In the 18th century which was the decline of the Mali Empire, the Ashanti people established a powerful kingdom in the modern day republic of Ghana. Their symbol of kingship was a stool of solid gold in which only the king was allowed to sit upon. The Horned Pendant is an Asante gold pendant that is shaped like a horned mask.

The City of Bamako, capital of Mali is now one of the poorest countries in the world. The Malian people believe their misfortune was caused by their ancient emperor, Mansa Musa. In fact, they are so disgruntled by his behavior then, that there is sever punishment for even mentioning his name.

Deelishis Defends Her Booty Body Being Over Sexualized