Urban Fashion Is The Fashion Statement Of Nubian People 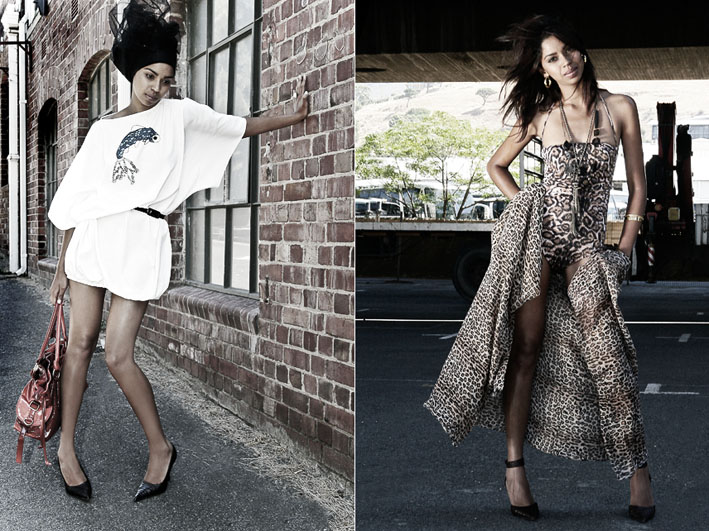 These African American women are wearing street fashion clothing. On the right you have an African American woman dressed with a black bandanna on her hair that is worn in an up style. Her loosely fit white shirt has a painting of a blue fish and her ruffled shorts extend past her thighs. She has smooth legs and is wearing black high heel shoes and carries a stylish pink handbag.

On the right you have an African American woman wearing a leopard dress complimented with black beads and black strapped stilettos. Her leopard imprinted dress opens in the front and reveals her long illustrious legs.

This man is wearing a fashionable black sports jacket which has trendy zippers and a snazzy collar. That is the goal of urban fashion... to express style with attitude.

These black men are dressed in corporate attire, however, there is much attitude in their fashion choices. The gentleman at right is wearing a black fedora with sunglasses and a brown scarf over his black blazer jacket, complete with stylish tight black leather gloves. In the middle you have a creative fashion choice of a pink sweater vest that is complimented by a yellow and black tie with a brown dotted blazer jacket. On the left, this Nubian brother is wearing a checkered blue dress shirt with a patterned blue tie and a silver blazer jacket. All of the men are wearing docker pants and their attitude is omnipresent in this photograph.

This woman looks so cute in her jean short out fit with her jean jacket that has rolled up sleeves. Underneath ehr jacket, she wears a flower blouse, but what really brings out her outfit, are the laced see through leggings worn with work boots. Her style has a lot of attitude and it's a very vibrant and attractive urban outfit.

The black man wearing this urban outfit is sure to make people take note of his style with white shirt and blue tie, grey blazer with a grey checkered scarf and black gloves in his hand, complete with navy blue denim jeans and casual leather boots and a brown man purse. Coordinated freshly with his outfit is a burgundy hat. This urban outfit is a winner. Attitude is sexy. If this is so, how could urban street fashion not be sexy? It's a way of expressing your mood or even your beliefs. No one can correct street fashion because it's never wrong. It just is.

The Black Man Is God